The Ultimate Fighting Championship ventures to South America for this weekend’s stacked card.  Every main card bout features a Brazilian fighter hoping to gain an edge in front of his home crowd.  This card also sees a change in the broadcast booth, commentary stalwart Joe Rogan will be filming a rebooted version of Fear Factor this week; therefore, UFC contender Kenny Florian will be in the booth with Mike Goldberg. On to the preview!

In late 2009, Cane was being mentioned as a Light Heavyweight contender and was working towards being in the title picture. Though his three-fight win streak was derailed by consecutive losses to ‘Lil Nog’ and Cyrille Diabate. Cane made quick work of Eliot Marshall last time out, winning by TKO in the first round.  Stanislav Nedkov is a Bulgarian product making his UFC debut.  He holds an undefeated record of 11-0 and has earned a black belt in Brazilian Jiu-Jitsu.  The 29-year-old holds notable victories over Travis Wiuff and Kevin Randleman.

Prediction: Cane by decision. I expect the Brazilian crowd to fuel the heavy-handed Cane to victory over Nedkov who has only fought once since submitting Randleman in late 2009.

Barboza is an undefeated member of the lightweight division. His last bout against Anthony Njokuani won Fight of the Night honors and featured great kicks like this one by Barboza. Barboza is a gifted striker who has two TKOs on his resume due to leg kicks alone.  The Brazilian will be facing off against The Ultimate Fighter 9 winner Ross Pearson.  Pearson has remained relevant in the UFC Lightweight division after his reality TV stint with solid wins over Dennis Siver and Spencer Fisher. Pearson will look to utilize his Taekwondo and Judo skills to control Barboza and stay out of the way of Edson’s lethal strikes.

Prediction:  Barboza by TKO. I expect the Brazilian to maintain his winning ways and use his impressive Muay Thai skills to punish Pearson.

Now we jump into the real meat of this card. ‘Big Nog’ is an ambassador of MMA. He belongs on the sacred Mount Rushmore of MMA fighters.  His skills are unprecedented in the cage and his record of 32-6-1 (1NC) doesn’t do justice for a man that is a true warrior when the bell rings. He is a true superstar in Brazil; hopefully the raucous Rio crowd can reinvigorate Big Nog who is 1-2 in his last three fights, with his two losses being the first two knockouts he has suffered in his exemplary career.  He faces off against Ultimate Fighter product Brendan Schaub. Schaub is on a four fight win streak with his last win coming by knocking out another MMA legend, Mirko ‘Cro Cop’ Filipovic.

Prediction: Schaub by Knockout. I have nothing but respect for Nogueira, but after suffering two knockouts in his last three fights, his chin is somewhat suspect. Schaub has impressive athleticism and powerful hands that will spell trouble for the aging superstar.

Forrest Griffin is one of our favorite fighters here at Moai Martial Arts. His books provide for quick, laughter-filled reads and an unprecedented look into the mind of one of the greatest personalities in MMA.  Forrest took the Light-Heavyweight title from Rampage Jackson at UFC 86 and appeared to be ready for a long reign at the top, but the title switched hands again when Rashad Evans knocked Griffin out just five months later. Anderson Silva then embarrassed Forrest at UFC 101 which resulted in Forrest’s infamous ‘running’ incident, and the affable Forrest seemed to shy away from the MMA spotlight for some time. He returned with consecutive wins over the old guard of the Light-Heavyweight division, defeating Tito Ortiz and Rich Franklin.

‘Shogun’ Rua was an absolute monster in the Pride organization in Japan. He amassed an 11-1 record in the organization with his peak coming when he defeated Alistair Overeem and Ricardo Arona in the same night in 2005 to win the Pride Middleweight Grand Prix.  Shogun was unceremoniously welcomed to the UFC at UFC 76 by none other than Forrest Griffin. Griffin won the bout by submission in the third round. Shogun then went on a win streak over greats like Chuck Liddell and Mark Coleman to eventually get a shot at the title against Lyoto Machida at UFC 104. The bout was extremely close; judges deemed that Machida did enough to retain his title, but many MMA fans felt as though Shogun should have won the fight. This prompted an immediate rematch at UFC 113, where Shogun knocked out Machida in the first round to win the UFC title.  He then proceeded to drop the title to upstart superstar Jon Jones at UFC 126.

This fight faces two former champions against one another. Rua will be looking to avenge his UFC 76 loss to Griffin, while Griffin will be looking to prove he belongs back at the top of the UFC Light Heavyweight division. Both are gifted strikers and black belts in Brazilian Jiu Jitsu.  I expect a true war between these two with each looking to regain their championship form.

Prediction: Shogun by decision. I believe that fighting in front of his homeland’s fans Shogun will channel the dominance he exhibited in Pride and during his UFC title run and defeat Griffin who hasn’t seemed to have the same presence in the ring since his loss to Anderson Silva. 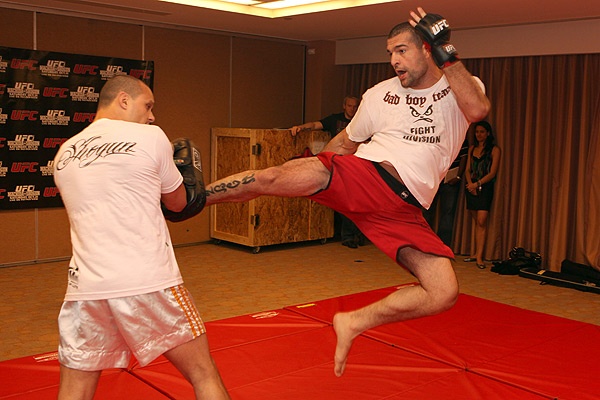 If you read my previous article ranking the Top Ten fighter’s in MMA (which can be read here) you will know that I am a firm believer that ‘The Spider’ is the best fighter on the planet.  Silva has run through the middleweight division making quick work of some of the world’s greatest fighters.  He makes everything he does in the ring look easy, whether it be front kicks, or spinning back elbows, Silva’s strikes are effortless and hit with tremendous force and accuracy.  Though Chael Sonnen pushed Silva to the limit at UFC 117, Silva somehow miraculously caught Sonnen in a triangle choke late in the fifth and final round to retain his title. Silva comes in to this fight on a 14-fight win streak, while successfully defending his title eight times.  UFC fans have never witnessed an Anderson Silva loss, and when posed with the question about the last time The Spider tasted defeat many MMA fans may be left scratching their heads. It came to none other than Yushin Okami at Rumble on the Rock 8 in January of 2006.

Yushin Okami is no pushover. He boasts a 26-5 record and was recently anointed “the best fighter to ever come out of Japan” by Dana White.  The southpaw Okami is a skilled grappler and kickboxer who looks to maintain his winning ways against Silva. In their last fight, Silva was disqualified for an illegal blow to a downed Okami. Silva maintains that the rules of the contest were not fully explained to him before the fight, and he did not strike Okami illegally out of malice.  But regardless, the fight stands as a win for Okami, and a loss for The Spider. Okami is coming off of impressive wins against middleweight contenders Mark Munoz and Nate Marquardt.

Both fighters are large middleweights. Silva regularly walks around well above 200 lbs., and Okami looks to utilize his size and strength to deal with Silva’s size in the ring. Okami has only been knocked out once in 31 fights, proving he will be bringing a solid chin into the ring against Silva on Saturday.

Prediction: Silva by knockout. He has dominated the entire division, and I don’t have any solid proof that Yushin Okami can prevent from becoming another notch on Silva’s championship belt. Silva is simply on another level than his competition.

These predictions are my best attempt to predict the great card that the UFC is presenting this Saturday. I highly recommend that any interested MMA fans check it out; it should be a great one. Feel free to leave your predictions in the comments section. Enjoy the fights!