Taking a look at UFC on FOX 6: Johnson v. Dodson

Taking a look at UFC on FOX 6

If you haven’t caught glimpse of the ads promoting a “UFC World Championship” match during January’s NFL playoffs, then let me alert you to the fact that there is a heck of a card going down this weekend on FOX.  With massive stories going on in the sports world as of late involving fake girlfriends and cheating bicyclists, Saturday’s FOX card seems to be flying under the radar.

The nationally broadcast Main Card starts of a serious run of legitimately stacked UFC events in the next few months.  We kick of things with the former top contender at 145 lbs. Erik Koch returning from injury to take on surging Ricardo Lamas. The second course will be an all out scrap between Anthony ‘Showtime’ Pettis and Donald ‘Cowboy’ Cerrone.  The two have been verbally fueding for months and this fight seems tailor made for a national audience. Sadly, Rampage Jacksonw will be making his last (alleged) appearance in the UFC Octagon against up and comer Glover Teixeria in the Co-Main Event of the night.  Hopefully, my guy Rampage can leave the company on a good note. Finally, we get that much talked about “World Championship” match. The UFC and FOX were suspiciously coy about mentioning the weight at which this World Championship fight would occur during the ads that ran during the NFL playoffs. When some ‘casual’ fans tune in and realize that John Dodson and Champ Demetrious Johnson are smaller than the kickers on their favorite pigskin playing squads, there could be some Natty Lights slung at double wide walls and 7/11 brand cheese dip kicked over aging shag carpets. On to the preview!

Erik Kock is the former number one contender for the belt that Jose Aldo so comfortably wears around his waist.  They were first booked to scrap in July 2012, but Aldo had to pull out of the fight with an injury. The tilt was pushed back until October of that year, but unfortunately Koch had to then pull out of that one with his own malady. In order to get the 145 lb. Champ Aldo in the cage as soon as possible, Frankie Edgar was made the number one contender at Featherweight and is scheduled to take on Aldo in just two weeks.

Ricardo Lamas is a former All-America wrestler who has been laying waste to anyone the UFC puts in front of him as of late. He is on a three fight win streak with his last two W’s coming over top talents Cub Swanson and Hatsu Hioki.

I think the X factor in this bout is Lamas’ wrestling. Koch’s only career loss came against another decorated wrestler in Chad Mendes.  I imagine Lamas will look to take this thing to the ground and neutralize Erik’s striking prowess. I see three rounds of Lamas controlling Koch on the ground while looking for a finish. I don’t see him getting it though. Lamas by decision.

We rarely get nicknames in MMA that truly fit the fighter they describe, but Cowboy and Showtime fit these two to a T.  Footage of Cerrone riding a majestic steed in the highlands of Colorado are a staple in any highlight package the UFC creates for him. And Showtime??? I mean, the freaking ‘Showtime’ kick explains the nick title itself. Pettis admittedly goes for ‘big moves’ in big spots and no one that has watched him over the years can argue that fact.

Both athletes are coming off flashy head kick TKO victories over top competition and the winner this weekend will likely be thrown to the top of the ladder that is the ever growing Lightweight hierarchy.  Any time two Lightweights get into the cage and both have a penchant to stand and bang, there is a good chance we are in for something special. I expect nothing less than an explosive performance from Cowboy and Showtime.
According to the odds makers in Vegas, this is as close to a ‘Pick ‘Em’ fight as you can get.  If anything, Pettis may be a slight favorite.  I have to agree with the wise guys here. It is tough to call a certain victor here, but if anything, I can see Pettis getting the better of the exchanges on the feet. As a fan of the sport, I am hoping for three rounds of elite striking from these dudes, and I fully expect to get it. Pettis can, and will, inflict more damage earning him a decision win. Pettis by unanimous decision.

If you have ever read my stuff before, you know Rampage Jackson is my guy. It will be a melancholy moment for me to see him enter the cage for a final time on Saturday night.  He is the reason that I became interested in this sport and to see him leave his best days behind him will be saddening for the fanboy in me.

His final UFC opponent will come in the form of rising star Glover Teixeira.  Glover is a Padawan of Chuck Liddell and The Pit team and has an all around game that has many MMA fans saying he has the potential to be a future champ in the division.  Glover has won 17 bouts in a row, which is a feat in itself, but his competition hasn’t exactly been stellar during that run. He has fought in the UFC only twice, with his last opponent being human punching bag Fabio Maldonado.  Glover looked like a MONSTER in that scrap, but it is safe to say Rampage is a serious step up in competition for the granite skulled Maldonado.

Glover says he plans to stand with Rampage and knock him out. A lengthy line of fighters have have promoted that tactic before fights against Jackson, but it is rare if any of them follow through. Rampage says he has heard through the grape vine that Glover plans to take him down repeatedly during the fight, but let us hope for the national TV audience’s sake that these two stand and throw bungalows.

Let’s be real, I am too big of a fan here to make a neutral prediction, but I have to go with the man, the myth, the legend Rampage Jackson. I sit here staring at his Round 5 figure on my desk, and the action figure may come alive in the night and beat me into a pulp if I picked against the life size ‘Page. Rampage is a pretty solid underdog here, going off at around -300 to Glover’s +200, but I will call a TKO for Rampage to finish off the UFC chapter in his career. Rampage by Second Round TKO. 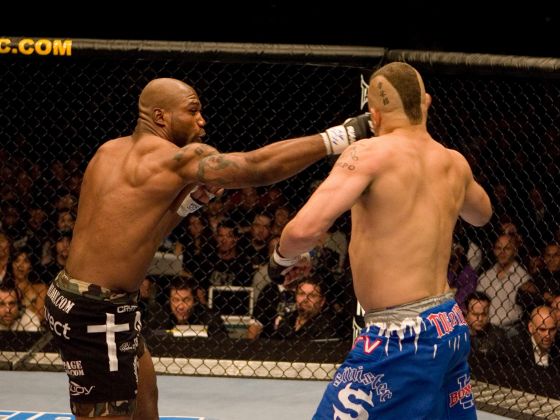 Ahh, the little guys… Whether it was savvy marketing by FOX and the UFC to leave out the weight class when promoting this one is yet to be determined, but we do know what we are getting in to when two of the fastest guys in the promotion are locked in the cage together.  The speed of the two athletes will be showcased as they move in and out throwing relentless combos and attacking double legs with reckless abandon.  These guys do NOT gas out and provide constant action in their entaglements.  Some detractors are often disappointed by the flyweights inability to do visible damage or finish fights, but they often miss the high level technique and strategy going on in these scraps.  Johnson and Dodson will surely put on a clinical striking clinic as well as a grappling tutorial on Saturday night, all without letting up on the RPM’s. Let’s just hope that the national audience can realize and appreciate what they are watching.

Vegas likes DJ to retain his title on Saturday night. I happen to be in the contrarian camp here. Dodson is an athletic freak that has unexpected power for his size.  Johnson acknowledges that Dodson may have a power advantage, but proclaims that the challenger will first have to hit him to use that power. DJ is a slippery fighter, he can get in close, throw a combo, and eject back to safety faster than anyone in the promotion. On the other hand, Dodson is likely faster than anyone (even DJ) in the organization and I believe he will be able to get in a few unexpected shots to inflict enough damage to Johnson’s face to take the strap from him.  This is a classic case of the immovable object vs. the unstoppable force. Speed certainly kills, but I have to go with the more powerful of the two here. Dodson by decision. 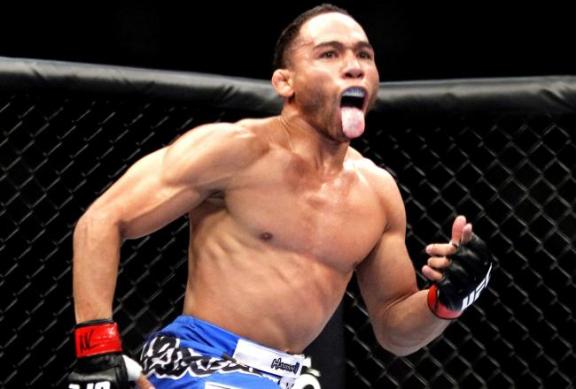 Your future Champ ladies and gents…

I hope you are ready for a night of free fights on Saturday! Feel free to leave any comments down below. Make sure to follow us on Twitter during the fights, I will be providing up to the second insight!

1 Response to Taking a look at UFC on FOX 6: Johnson v. Dodson