I’m back! I know, you all have been on the edge of your seats awaiting the return of my wit and breathtaking prose. It has been a relatively slow month or so in the world of combat sports, but we are being bombarded with fights this weekend and for the foreseeable future. I’ll touch on the five fights that I find most compelling this weekend and why they should be essential viewing for any fight fan.

Honorable Mention: Gustaffson/Mousasi would have been Numero Uno on this list, but with Big Gus slashing open his eye socket and being pulled from the fight, I haven’t included the new matchup of Mousasi v. Illir. I expect quick work from The Dreamcatcher and expect a first round KO over whatshisname.

I don’t see no stinkin’ cut!

Until Ariel Helwani tweeted it today, I had no idea Karo was fighting for Bellator these days. You don’t really know what you are going to get from the former UFC contender anymore, but toss him in the cage with my personal favorite Bellator product, Rick Hawn, and I’m guaranteed to tune in. Karo has won two in a row (one of those being against a dude named Tiger Bonds…) and Hawn was last seen being submitted by Bellator Lightweight Champ Michael Chandler in January.  Both guys sport a black belt in Judo, so expect some nasty tosses when the cage door closes on this one. Hawn has faced better competition of late and I think Karo’s best days might be behind him. I’ll have to take Hawn by decision here.

No, that is not Brandon Vera with a beard…

This is another one of those classic grappler versus striker bookings.  We all know Larson (who spells his name wrong…) from his WEC/UFC stint where he had relative success, but never really found out how to defeat elite competition. He could steamroll the lesser talented fighters, but when he ran into a young Carlos Condit or Mike Pierce, he had some himself some issues.  Opposing Larson at ONE FC will be devastating striker Melvin Manhoef. If you are even remotely plugged in to the MMA blogosphere, you have seen the highlights of this dude kicking dudes in the head and cracking their ribs with no remorse.  Manhoef ruined Denis Kang in his last scrap, and I expect him to do the same to Larson. I expect an early TKO here with Manhoef deliviering another .gif worthy deathblow.

What? A Facebook prelim is Number Three on the list? Yes sir. In case you aren’t aware, Conor McGregor is well on his way to becoming one of the most colorful characters in MMA.  He is Irish to the core and won’t hesitate to tell you how much he loves his country.  He was a two division Champ in the European Cage Warriors promotion and has 12 wins under his belt, all 12 being finishes.  I think we could be watching the debut of the next Michael Bisping when McGregor enters the Octagon on Saturday, but you know, with actual talent… (Just kidding, Mike)  Conor’s opponent will be UFC vet Marcus Brimage, who has been on a steady win streak as of late and is quite the character himself. Just check out his weigh in attire.  I expect a hell of a show from these two guys and they will leave everyone wondering how this scrap didn’t end up on the main card.  I am expecting a back and forth war, but McGregor takes the decision here.

Two is better than one.

Gesundheit! Pat Curran kicked off Bellator’s move to Spike TV with an absolute slugfest against Pitbull Freire back in January. Curran has defeated the who’s who of the Bellator Featherweight division over the last few years and has risen to become of the elite 145 pounders in the world. He will be facing off against Shabulat Shamhalaev tomorrow night, who is no slouch himself, no matter how hard his name is to say. “S.S.” has KO’d all three of the opponents he faced in the Bellator Featherweight tourney last year and will be looking to put the Champ to sleep as well. “S.S.” has all sorts of crazy Russian martial arts credentials, but he has never encountered a fighter as highly skilled as Curran. It seems as though I am picking a lot of decisions this week, but I see this tilt going to the judges and Curran taking it unanimously. 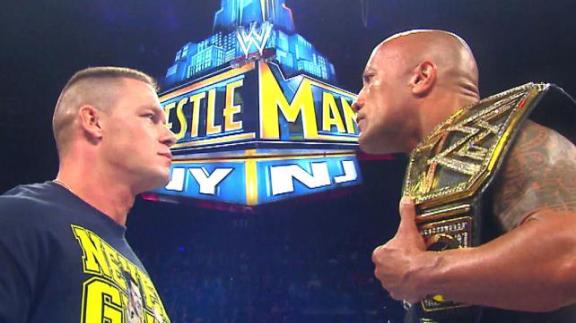 Once, scratch that, TWICE in a lifetime!

Yup. I did it. A pro wrestling ‘fight’ is my Number One must watch fight on this packed weekend of combat sports. For all of you that are groaning out there, you probably didn’t grow up in the Attitude Era of pro wrestling where The Rock and Stone Cold Steve Austin were gods among men that opened up cans of whoop ass every Monday night.  Being that I now live solo, I have found myself reverting to my adolescent days and tuning in to Monday Night Raw every week.  The fact that many of the same stars that were around during the peak of my wrestling fan hood are still competing (Rock, HHH, Undertaker, Lesnar, and Jericho are all on the WM 29 card) in the ring may add to my approval level of the current product. 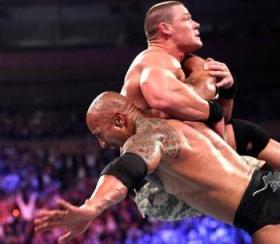 If you are still doubting me, take a look at Rock and Cena and tell me those dudes couldn’t teach us all a thing or two about fitness and nutrition.  Just last year, these two headlined Wrestlemania 28 and put one an unbelievably epic show. The event was in Rock’s hometown of Miami and the crowd was freakin’ electric as soon as the Brahma Bull’s intro music hit.  The two titans had a back and forth battle where Rock eventually emerged victorious. Since the loss, Cena has gone through some personaly turmoil away from the WWE as well as unprecedented hatred from the fans of the WWE Universe. He is such a ‘babyface’ that anyone over the age of 13 has a hard time rooting for the guy.  I don’t blame them, but he is one of the few legit stars left in the company that isn’t a soon to be member of AARP.

Wrestlemania 29 is going down just up the street from me at Metlife Stadium in New Jersey. The show should have an unrivaled production value and with the Rock’s WWE Championship on the line, I am sure I will be able to hear the boos from my humble abode if Cena leaves the arena with the strap around his waist. In short, two of the biggest stars in the history of pro wrestling are tangling at one of the biggest shows in the history of sports entertainment, I highly suggest you tune in, you won’t be disappointed. And if I had to pick, Rock is taking this thing with a massive Rock Bottom leading to the 1, 2, 3. Now something to make the boss happy after I spent three paragraphs talking about pro wrestling!

Whether you are watching Bellator, One FC, Invicta, or Wrestlemania this weekend, send us a tweet! @MoaiMartialArts