The results of our last poll showed that you wanted more equipment reviews, so here’s the first. I just received a Training Mask after watching Wanderlei Silva and Sean Sherk restricting their breathing while working out. Sherk actually developed this device as a means to simulate high-altitude training–something I’ll evaluate in the next few posts.

It looks pretty freaky, huh?  The warning label doesn’t really entice you to wear the mask either. 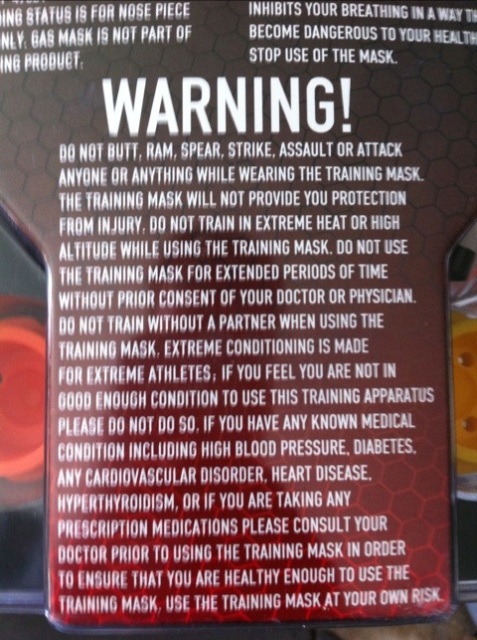 Now intimidated, I decided to try it on for a few minutes. The mask is rubber, the straps easily adjustable. It even looks tough, like wearing it will make you into an Imperial Stormtrooper or the guy from the cover of New Vegas.

But aesthetics can’t eliminate the initial freak out. You know that feeling when you swim underwater for just a moment longer than you should? That panic set in after two seconds. There are three “levels” of breathing resistence, as adjusted by switching out the colored nosepieces. I was on yellow (the lowest) and couldn’t fathom what the others would feel like.

After literally sucking wind for a little while, I desperately wanted to take it off. How the hell does anyone train in this thing?   Sean Serk demonstrates a deceivingly easy workout on trainingmask.com.  If you watch the video, he’s moving at pretty low intensity compared to his usual pace–not because he’s off the “supplements.”  He just can’t breathe!

I reminded myself that it’s recommended to wear the mask during normal activity to adjust.  So, I walked around my office a bit and did some light kata. Not so bad after a while.  I survived the trial, but what about an actual workout?

Stay tuned for a few “high-altitude” training sessions! I’ll report on the challanges and results in my next post.

Lucky enough to grow up with the martial arts, I have felt their positive influence throughout my life and am especially interested in sharing these experiences with others. I enjoy working with youth and adults to give back some of what I've received. If you would like to learn more about Uechi-Ryu/Shohei-Ryu Karate, or if you want to find people to train with, please contact me. I am the head karate instructor for the Meriden Martial Arts Club.
View all posts by moaimartialarts →
This entry was posted in Equipment, Fitness, Reviews and tagged altitude training, Fitness equipment, Sean Serk. Bookmark the permalink.