Are the UFC’s global events becoming too localized for the American fans? 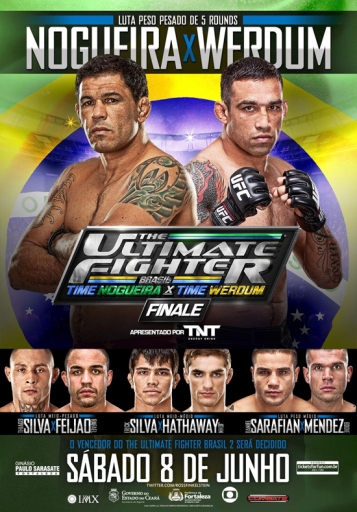 On this week’s Co-Main Event Podcast, Ben Fowlkes and Chad Dundas had an intriguing discussion about this Saturday’s UFC on FUEL TV 10 card going down in Fortaleza, Brazil.  As they started up with their typical irreverent preview of the event, they divulged into the topic of the Brazilian localization of the fighters on the card. This event is clearly Brazilian heavy and obviously has a strong appeal to the rabid Brazilian fan base. Though there is little to draw the ‘casual’ American fan on a summer Saturday night. With bigger cards on the horizon, I personally doubt that I will tune in to this card in full on Saturday and I even had to reach to the depths of my blogging willpower to throw this preview together for my loyal readers.

Sure, Big Nog v. Fabricio Werdum is a big time fight in the Heavyweight division, but as for the rest of the card? There is little appeal to me and with the NBA Finals being underway, I do not expect this card to be a major hit ratings wise for the promotion. Back to the Fowlkes and Dundas discussion, as MMA fans are we supposed to care about this Brazilian flavored card, or is the event’s main audience the Brazilian faithful? As journalists, the duo shared their feelings about covering an event that is happening a continent away with fighters that the average American fan doesn’t really know or care about. As the UFC continues on its quest for global domination, we will surely see the role of these localized cards become clearer, but in the meantime here is a preview of the only two fights on the card that I feel that I can competently talk about. On to the (quick) preview!

It is a rare occasion in the UFC when two fighters coming off drug suspensions are pitted against each other. It is safe to say that the loser of this one will catch his walking papers soon after the lights dim in Fortaleza.  Silva has not won in his last four, though two of those fights were once considered wins, but later overturned due to failed drug tests. How he is still employed by the UFC is still somewhat mind boggling to me, but I try not to lose sleep over it. The promotion is not doing him any favors by throwing him in the cage against Strikeforce vet Cavalcante. Feijao is coming off a no contest against Mike Kyle, where Feijao originally won by first round submission. Feijao is a 2-1 favorite and that makes complete sense to me. At this point in his career, he outclasses Silva on almost every level. Cavalcante takes this by 2nd round TKO.

Finally, after being cast off to South America to film TUF Brazil 2, these two titans will be tangling in the cage. Big Nog is one of my all time favorites and I usually make it a point to watch each and every one of his fights live. That may change with this card, but I fully expect Big Nog to be at his best in Brazil. Werdum provides a serious test for the larger Nogueira brother and the wise guys in Vegas have Fabricio listed as a 3-1 favorite.  The first time these two met up in PRIDE in 2006, Big Nog cruised to a unanimous decision. As much as I want the old dog to win, I see a tough night’s work for Minotauro against Werdum. Both athletes have black belt level jiu-jitsu therefore I see the ground game being a push, but I believe Werdum’s superior athleticism and speed on the feet earning him a decision victory over Big Nog and his methodical boxing technique.  Tough to say, but Werdum by decision.