The Calm Before the Storm

Haven’t heard about this Saturday’s FREE UFC on FOX card yet? I don’t blame you. The UFC hasn’t exactly been throwing down the big bucks on promotion for this weekend’s event. With massive Pay Per Views and the FOX Sports 1 launch just a few weeks away, I think the UFC, and many fans, are treating this card as an appetizer for the avalanche of MMA that is headed our way in the coming months.

This card is another unfortunate victim of the injury/replacement bug that plagues our favorite sport. Robbie Lawler was initially slated to face off against former Strikeforce Welterweight Champion Tarec Saffiedine, but Saffiedine was forced off the card and replaced by heavy handed Siyar Bahadurzada. Sadly, ‘Siyar the Great’ had to pull out of the fight with Lawler and was replaced with Bobby Voelker. Voelker certainly is not the biggest draw for the national TV spotlight. Miesha Tate was also supposed to kick the card off against recent #1 contender Liz Carmouche, but Tate was bumped into a TUF slot against Ronda Rousey due to Cat Zingano’s injury, thus the underdog Jessica Andrade was picked to fill in against Carmouche. With these injuries and replacements, I am thoroughly surprised that some fights from the above average undercard were not moved to the big show on FOX to attempt to draw more ‘casual’ fans, but hey, I’m not the one calling the shots at Zuffa, …yet.

Even without huge drawing power, this could be one of those cards that provides excitement from top to bottom, even though we sat down to watch with very low expectations. Saturday should still be a fun night of FREE fights, check out my preview after the jump!

Undercard on FX at 5 PM 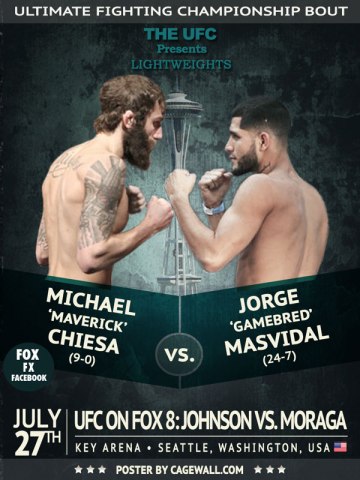 Credit to Cagewell for the pic!

It would have made a ton of sense to put a pioneer like Kedzie in the cage with Carmouche to kick off the FOX broadcast, but that’s just my opinion. Kedzie gets a submisson here.

The vet Herman gets a decision win over the Strikeforce import Smith.

This one has barn burner written all over it, but the Thugjitsu Master wins by submission.

Blast from the past scrap! Danzig is fresh of his ‘Macau Screwjob’ loss, and Guillard has dropped two in a row. I hope these two don’t play it safe, because they each have the ability to put on a heck of a show. I believe the vegan Danzig takes home a decision here.

Castillo was supposed to take on Bobby Green in this slot, but Green pulled out due to, you guessed it, injury. That fight would have been epic, but I don’t see Means having much to offer the Team Alpha Male product. Castillo by submission.

The fact that this fight isn’t being broadcast on FOX keeps me awake at night. Seriously. Sure, it anchors the FX coverage, but hometown product Chiesa would be the perfect way to kick off the event on the big network. Again, I don’t run things at Zuffa, yet…  Chiesa is a big underdog, but I have been rooting for him ever since his emotional TUF Live run. His wrestling will give Masvidal fits when he tries to find his range. This might be a homer pick, but going with Chiesa by decision.

It is an amazing moment for this sport that the broadcast is being lead off with women’s MMA, and two openly gay fighters to boot, but I don’t see the butt whipping that Carmouche will inevitably put down on Andrade being a great way to introduce women’s MMA to the FOX audience. The Tate/Carmouche fight made sensee, Kedzie/Carmouche makes just about as much sense, but throwing the little known Andrade in there baffles me. Carmouche is a 5-1 favorite and in my opinion she should be an even bigger one. Carmouche pulls off a first round submission here.

All the credit in the world to Voelker for stepping in and taking this booking on two weeks notice, but I don’t see him standing much of a chance against ‘Ruthless’ Robbie.

All of Voelker’s prefight interviews have been based around the fact that he juggles a job, school, family, and training. It just doesn’t seem like he is as focused as he needs to be when entering the Octagon against someone like Robbie Lawler. Lawler looked rejuvenated, and as powerful as ever, when he KO’d Josh Koscheck earlier this year. Look for Lawler to get another TKO victory in this FOX showcase.

If you are going to tune in Saturday for just one fight, this is the one you want to watch. Both athletes are jostling for upper echelon position in the Welterweight division and each are on a mission to earn a title shot. We all know about Rory’s relationship with TriStar and the odd image he has created for himself, but Ellenberger has been relatively under the radar for the last few years.

If you compare their records blindly without taking name recognition in to account, Ellenberger would be the far and away favorite. He has 20 more fights under his belt, KO wins over the notoriously hard headed Mike Pyle, John Howard, Pele Landy (!), Sean Pierson, Jake Shields, and Nate Marquardt. He has literally decimated much of the Welterweight division over the last three years. Though according to the Vegas wise guys, Rory Macdonald, sporting his two biggest wins against two Lightweights (Nate Diaz and an aging BJ Penn) is a 2-1 favorite in this fight. It is evident he has the talent to become and elite Welterweight, but I believe Ellenburger stops the hype train dead on Saturday with a brutal KO win of Rory.

Oh, you had no idea who John Moraga was before the UFC’s Road to the Octagon special this week? Same here! Moraga was relegated, like many Flyweights, to the Facebook prelims prior to his Main Event slot this Saturday on FOX. Many of the complaints out there about the 125 pound division are valid and I can see why many fans are turned off by tiny men bouncing  around in a seemingly cavernous cage. Moraga’s story has really piqued my interest in this fight and I truly believe he is going to give Mighty Mouse a run for his money and make this fight worth its top billing.

Moraga is massive for a flyweight, standing at 5 foot 6. I hope he can use his reach to keep Mighty Mouse engaged and prevent him from circling and picking his shots as we so often see the Champ do. Dodson tried the same tactic in his last fight, but he just couldn’t overcome the quickness advantage that Johnson possessed over him. We have seen DJ struggle with longer, rangier fighters (Dominick Cruz) in other weight classes, and hopefully Moraga can provide the same problems for the Champ. This is a tough fight to call, as I would much rather see Moraga win the strap due to his impressive background story, but Mighty Mouse seems to have the Flyweight division on cruise control. There is a slight chance that Moraga ends the night with a vicious KO, but I see a decision victory for the new father Demetrious Johnson as the likely outcome.