In case you aren’t as plugged in to the world of MMA as some of us, upstart promotion World Series of Fighting is putting on a seriously impressive card this Saturday night on NBC Sports Network. If the recent lackluster UFC events have you in a funk, this WSOF show is definitely worth checking out. Here are the top four reasons you should tune in tomorrow night. 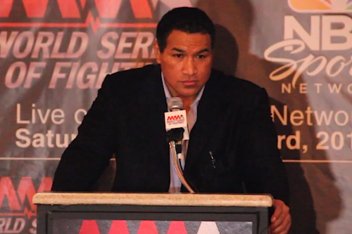 How often do you get to see the President of a promotion fight on one of his own cards?

If I know my readers, I am assuming you had an issue putting names to faces for the last two UFC cards. Even on the Main Cards, some of you may have been scratching your heads trying to figure out the difference between Bobby Voelker and Jacob Volkmann.  Don’t get me started on that 163 Pay Per View either, I’m not sure how Zuffa convinced itself, let alone the general public, that Thales Leites v. Tom Watson or Cezar Ferreira v. Thiago Santos was worth our hard earned cash.

If you take a look at this WSOF of fighting card, you will instantly recognize the names of fighters from the top to the bottom of the card. Compare it to the Russian imports over at Bellator and the Brazilian flavor of recent UFC events, and this WSOF is like a walk down memory lane for many MMA fans. Notables like Gerald Harris, Jorge Santiago, and Jared Papazian are on the undercard, as well as Black House product Lew Polley.  If we move up the card big time names like Nick Newell, Marlon Moraes, Ray Sefo, Tyson Griffin, JZ Cavalcante, and Tyrone Spong pop up. Even if you are a casual fan of the sport, some of these names will ring a bell for you and are sure to make watching this FREE event an enjoyable experience.

The man, the myth, the legend.

In my opinion, WSOF has the second highest production value in the hierarchy of MMA promotions after the behemoth that is the UFC. The inimitable Bas Rutten will be on the mic and his presence alone can pump excitement in to any fight. The 10 sided cage that WSOF utilizes look great on television and the venues they have held events in have translated well to the small screen. I see WSOF and Bellator on similar levels in the MMA world, and I believe that WSOF looks infinitely better than the Viacom product. Bellator seems as though it still produces events in front of half filled Indian Casino Arenas. Though WSOF’s matchmaking may still be a little friendly to the promotion’s big names, the visual product that they put out is top notch. 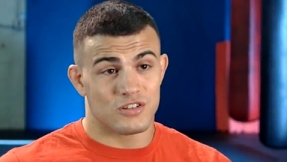 You may know Nick Newell as the ‘fighter with one hand’, but he is much more than that. He is a legitimate contender in the lightweight division. Handicap or not, the guy knows how to finish a fight. He is undefeated in nine tilts and has finished all of his opponents but one. Sure, his opponents haven’t been of an elite skill level, but Newell sure as hell proved that they didn’t belong in the ring with him by knocking two of them out and submitting another six.  There will always be the lingering story of Newell overcoming the odds to become a highly touted MMA fighter, but it is about time we start recognizing the kid for the talent he possesses, instead of what he does not. (And he is a Connecticut kid, so he automatically gets big time fan points here at Moai Martial Arts!) His fight with Keon Caldwell is easily my most anticipated scrap of the night.

4. Tyrone ‘King of the Ring’ Spong

If you asked me the last person in the universe that I would want to find at the end of a dark alley, I wouldn’t even need a second to answer before I spit out Tyrone Spong. When we talk about the Mayweather’s, Silva’s, Jones’s, and Klitchsko’s of the world as the best fighters on the planet, Spong’s name is often wrongly left out. This guy is an absolutely devastating fighter with unparalleled power in both his hands and legs.  He is 27 years old and holds a 72-6-1, 1 NC kickboxing record with multiple titles on his resume. He most recently ran through the Glory 9 Tournament where he overcame an early knockdown to claim the tournament win. If you have somehow never watched his documentary series produced by the same dudes that created The Reem, I highly recommend that you stop reading this and check them out(Part 1 is up top, Part 2 can be found here. All the props in the world to Eldar Gross, his skills are unparalleled.) They really give you a deeper look inside the life and mind of one of the greatest fighters on this planet. 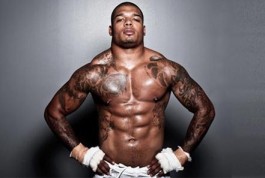 Saturday night will only mark Spong’s second career MMA fight. He is slowly transitioning to the sport while remaining active in kickboxing. (He is already booked for another Glory show in October.) You shouldn’t watch this fight because Spong is going to engage in a Joe Lauzon-esque Fight of the Year performance. Spong has little ground game to speak of and his opponent is an absolute can. This is were WSOF loses me a little bit, Spong is going to knock Angel De Anda into next week with relative ease. The matchmakers over there need to start raising the bar for some of their stars if they are going to be taken seriously in the future, but believe me, I will be tuned in on Saturday night to see exactly what the King of the Ring has in store for us. You should be too!