Posted on August 29, 2010 by moaimartialarts

First, please accept my apology.  I promised updates and couldn’t deliver too many.  I had spotty cell reception in the Hynes Convention Center and pretty much none in the TD Banknorth Garden.  We had a great day in Boston though, and here are the updates I hoped to post.  I won’t get into too much play-by-play or analysis: I’ll leave that up to Sherdog, Cagepotato, and MMAJunkie.  Instead, read on for the highlights of our day and the behind-the-scenes action you won’t find anywhere else!

NOTE: These “tweet” times are approximate.  They should help with the flow of events, but I’m probably more than a little off.

10:30AM – We arrive at the Hynes.  No lines really.  We get cool badges on lanyards and step inside. 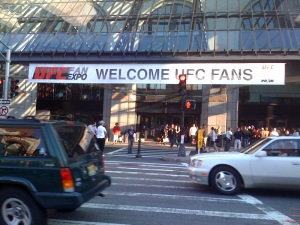 Entrance to the land of tribal tattoos and airbrushed T-shirts

11:30AM – We work our way around the expo.  There are lots of nice people handing out free stuff.  How could we not have fun?  We see Stephan Bonner, “Stitch” and lots of models.  We realize that breast augmentations attached to anorexics look a lot less appealing in real life than on TV.

12:30PM – We wait in line to meet Martin Kampmann and Urijah Faber. Shaquille O’Neil does a Q&A on the main stage, and we watch it on the projectors that are suspended from the ceiling.  He calls on a little kid from the audience, who challenges him to a fight.  Mike Goldberg is on hand for the commentary, and he works the crowd while the kid takes Shaq down, mounts him, and pounds him out.  Knockout of the Night?

1:30PM – We go downstairs to check out Grappler’s Quest.  The competitors at all levels are working hard, and there are so many great matches.  Team Kimura goes nuts every time one of their members scores a point.  When they win a match, they chant “Ki-moo-ra!” over and over.  It’s awesome.  Lloyd Irvin is there too, and he’s nearly silent in comparison.  He watches his students’ matches at purple and brown, analyzing them with the rational precision of a college professor and the intense concentration of a Zen monk.  It’s so cool to see his devotion to these students–especially considering the world-class grapplers he has in his stable.  Speaking of which, we spot Ryan Hall poking in and out of the crowd watching matches.  Glen “Big Baby” Davis is sitting on the mat, too.  I think he wanted to roll, but I guess it’s a little too close to basketball season!

2:30PM – We head back upstairs to get more autographs and see Chuck Liddell and Tito Ortiz–luckily far apart from each other!

2:45PM – I buy T-shirts from a woman I’m sure is BJ Penn‘s mom.  She’s really sweet, and I don’t bug her for a picture because she’s nearly lost her voice. 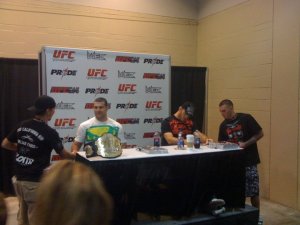 Shogun has the belt, Forrest has three bottles of Pepsi, a water, and his trademark Starbucks

3:00PM – We head back upstairs to get more autographs.  We wait in line to meet Johnny “Bones” Jones and Ben Henderson.  The line next to us is closed, which is no surprise because it’s for Forrest Griffin and Shogun Rua!  Forest doesn’t look pleased to be there; we think he’s got a cold or allergies because he keeps stifling a cough.

3:30PM – We meet Jon Jones, and he’s easily the coolest guy there.  He chats it up with the fans and takes funny pics with them.  I tell him I love to watch his fights, and he seems sincerely flattered–more to come on “Bones”!

4:00PM – We get in line to meet Anderson Silva.  I get a free sample of Redline, and there are more warnings listed on the bottle than benefits.  I think I’ll dump this out when I get home and keep it to teach a lesson on advertising to my students.  I wonder how many people ignored the “dosing” information on the bottle, chugged the entire thing, and ended up in the hospital?  It’s nice to see the “health” supplement industry is so prevalent these days.

4:30PM – We see Ed Soares near our line.  He shoots me a look when I go to take his picture that makes me pocket my iPhone.  I see Anthony Johnson and have no idea how he makes weight.  What a beast!

5:00PM – I get tired of standing in line, but I’m rewarded for being impatient.  I see Bruce Buffer in the bathroom!  Is it still considered rude to talk to a guy while he’s at the urinal even when you think he’s totally awesome?  Probably.

6:00PM – I get THIS close to Anderson Silva before getting a picture with him.  Security has decided the nice Brazilians in front of us have taken too long with him and autograph time is over.  Here are before and after pics: one as we’re just about there, the other as an officer is pulling me back by my shoulder.  Doesn’t he know I’ve been standing in line for two hours?!? 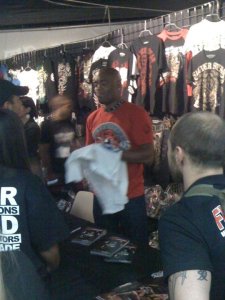 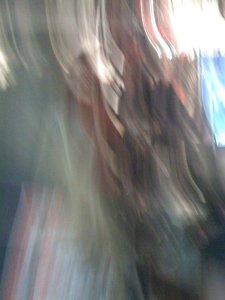 7:35PM – We see Jon Jones again.  This time he’s just hanging out in front of the Garden, chatting it up with the fans.  How cool is that?

7:45PM – We’re running a little late, and we watch the rest of the untelevised fights.  I’ve never seen live MMA before.  It rocks!  We realize we’re sitting in the middle of the Joe Lauzon friends and family section.  Everyone is wearing the same green T-shirt.  On the back, it reads “I love fighting like a fat kid loves cake.”  I guess they really love fighting because, as a former fat kid, I know I really loved cake!

8:00PM – I’m surprised how quiet the crowd is–and not because they’re not paying attention.  It’s weird watching MMA with no commentary, and it’s uncanny how focused the crowd is on the action.  You can hear strikes land and feet on the canvas despite the sold out venue.

9:00PM –  Bruce Buffer: “WE ARE LIVE!”  Audience: “WE LOVE YOU BRUCE!”  I enjoy a secret smile because I now know him a little more intimately than they do.

9:32.01PM – Lauzon DOMINATES and lives up to his hometown hero status.  I get caught up in the crowd and he’s my hero now too!  Now it’s loud in here!

10:00PM – Diaz and Davis definitely deserve fight on the night honors.  Davis reminds me why I could never be a fighter . . .

10:30PM – We see Jon Jones yet again!  This time he’s standing up in the crowd and starting the wave.  How cool is that?

10:35PM – The crowd is crazy for KenFlo; as he enters the speakers chant “Let’s go Red Sox!” before blaring the Dropkick Murphys.  I’m from Massachusetts originally, and this is our version of heaven: fighting, Red Sox Nation, The Garden, Irish pride, and punk rock.  Florian also reminds of the bitter taste of sports disappointment.  It’s not all on him though: both he and Maynard were fighting conservatively (i.e. for a title shot).

11:00PM – I hadn’t heard that Demian Maia was moved to this card.  I love his fights so I couldn’t figure out why he nearly fell asleep against Mario Miranda.  I think if someone was fighting me I’d at least be able to keep my eyes open.

11:30PM – I thought the crowd was loud for Lauzon and Florian.  James Toney was booed with “BOXING SUCKS” and Randy Couture was cheered with “M!M!A!”  I think Bruce Buffer was even more jazzed for this one than the crowd.  Fight fans really created the hype, and Couture didn’t disappoint.   I still hoped Toney wouldn’t been choked out like a white belt.  I am also marveling at how at 47 Couture looks like an action figure and is in better shape than I can ever hope to be.  I could see his abs from the nosebleeds!

12:00AM – There’s not a lot to say about Edgar vs. Penn 2.  It was like an extra five rounds were added to the first fight.  I was pretty neutral between the two, but even the die-hard Penn fans were scratching their heads.  Some even began leaving early.  Frankie Edgar looked great, and Penn has some thinking to do.  Here’s a final shot. 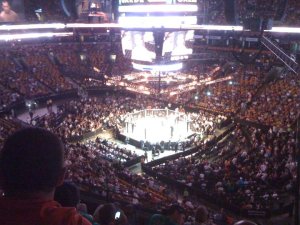 Penn is focused and angry and ready to fight. I can't help but giggle as the crowd chants "BJ! BJ! BJ!"

All in all, it was a great day in Boston!  We had a fun time and can’t wait to go back.  Needless to say it was a blast, but you also get a good value.  The Fan Expo pretty much paid for itself with freebies and discounts on MMA products, and while the sticker shock was severe when buying the tickets for UFC 118, it was worth every penny.  What other major sporting event lasts for over five hours and delivers so much action?  None unless you really like cricket.

Did anyone else make the trip to Boston yesterday?  Did you see the pay-per-view?  What’s next for Davis, Florian, and Penn?  Do you see any other champion boxers stepping up to the plate?  Let us know what you think!

Lucky enough to grow up with the martial arts, I have felt their positive influence throughout my life and am especially interested in sharing these experiences with others. I enjoy working with youth and adults to give back some of what I've received. If you would like to learn more about Uechi-Ryu/Shohei-Ryu Karate, or if you want to find people to train with, please contact me. I am the head karate instructor for the Meriden Martial Arts Club.
View all posts by moaimartialarts →
This entry was posted in Entertainment, MMA, News and tagged Couture vs. Toney, Edgar vs. Penn, mma, UFC, UFC 118, UFC Fan Expo. Bookmark the permalink.