ALar in 2012! My Campaign for MMA Presidency

With the election buzz beginning to take hold in the US and my Political Science degree collecting dust in the corner of my parent’s basement, I came up with a tantalizing proposal for the world of Mixed Martial Arts. What if President Dana White stepped down from ruling the UFC due to his recent battle with Meniere’s Disease? 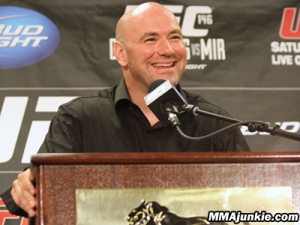 Who would the Fertitta brothers call to head up the promotion in the Baldfather’s absence? The Ghostbusters? Frank Shamrock? Nope. They would hold an internet election of esteemed bloggers to take over for the outspoken White. The early tallies will see the likes of Helwani, Fowlkes, and Dundas leading the pack. I will take my role as a Ron Paul-esque “little guy” with a growing grassroots following that borders on downright fanaticism. I’ll take my nomination from the Moai Martial Arts Party and begin my march to Vegas. Never count this blogger out! Check out my campaign platform on the following issues and let me know if you think I could take the reigns from Manchester, CT’s own, Dana White…

I am sick of the stalling and waiting we are seeing by certain fighters today. If I was the head honcho, no way in heck would a healthy Carlos Condit, the interim Welterweight “Champ”, be sitting on the sidelines waiting for a fight with GSP. 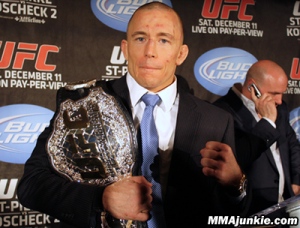 Let me show you a weel belt…

Jonny Hendricks recently called out “The Natural Born Killer”, demanding he defend his “belt”. What is the point of the interim belt if it is just a fancy piece of jewelry that a number one contender gets to carry around until the real champ is back? Here comes the first change ALar’s world of MMA, I would only let interim “champs” fight for unification if they successfully defended their “belt” at least once. Thus eliminating the lack of action in the Welterweight division we are seeing right now. I could really do away with Interim belts all together, but the UFC does love to be able to throw Champ in front of someones name when selling a PPV. I would also be booking Condit/Hendricks ASAP in order to keep the queue in the 170 lb division moving. (Though after last week, Martin Kampmann is making a whole lot of noise in the title picture as well…)

To be blunt, point fighting sucks. Guys who simply look to win on the scorecards and shy away from attempting to finish fights are hindering the growth of the sport. MMA judging needs an overhaul, and it needed to happen yesterday. It isn’t feasible to believe that Commission officials still think the antiquated 10-9 must system is applicable to today’s MMA. I mean, who really cares about Octagon Control these days? Not I. The fact that a fighter is punished on the scorecards for attempting submissions from his back because he is not in a “dominant position” is ludicrous. These rules are depriving all the fight fans out there of countless submissions ending in -plata that could have been happening from positions not considered “dominant”. The fact that a former fighter, Ricardo Almeida, recently became a MMA judge is a positive for the future of MMA judging. 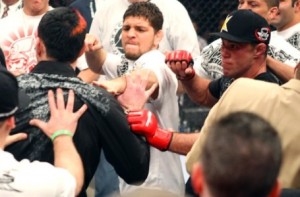 I truly believe judge’s need to have a much higher knowledge of the sport that they are so important to. I would do away with the 10-9 must system and establish a system that rewards overall aggression, significant and damaging strikes, and skill shown both standing and on the ground. With rules like this guys like Condit, Maynard, Fitch, Sonnen, and Askren would surely have to adapt their gameplans. They may not turn out to be big supporters of my campaign, but I am not sure I wanted their vote anyways. While on the other hand, the Diaz brothers would be vehement advocates of my movement. (They are also front-runners for cabinet positions…)

I understand that the UFC is out to make a profit, a large one at that, but there is one slight change I would make to the monetary side of the game. I would install a variable price rate for Pay-Per-Views.

I have no problem paying (or splitting…) [editor’s note: Alar still owes me five bucks] the full cost of last week’s Heavyweight fueled card. The night of fights delivered and was pure entertainment from the first fight to the last. Though consider the upcoming UFC 147 in Brazil. Is that an equal product to the 146 card? Or even the upcoming 148 card? Not a chance. Those saying that the card should be free are asking a bit much and don’t truly understand Pay-Per-View logistics, but moving the price point down to $30-$40 for lesser cards seems like a respectable act from the promotion to the fans.

Go back to your roots! The PRIDE organization was a key catalyst into igniting the MMA explosion we are currently experiencing. Remember how fun those events were? 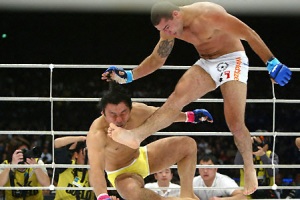 Would this ever happen in today’s UFC? It should! Those fighter entrances were over the top and extravagent, and they allowed fighters to further develop their characters and relationships with fans. I believe the UFC would be much better off if they brought back some of the pomp and circumstance of the fighter entrance and allowed for a little fun to happen outside of the cage. It hasn’t helped the cause for expanded entrances when guys like Mayhem are throwing together useless stunts that make little to no sense or impact. Imagine if Anderson came out dancing to ‘Beat it’ or Bieber and then iced Chael in the first round!?!? Any casual fan who saw that would be a regular poster on the UG in a matter of days!

I think these issues would be solid building blocks for my campaign. Add in fact that I am really, really, ridiculously good looking who knows what could happen!

A pic of ALar, just out of bed.

Think I could cut the mustard as UFC President? Would I have your vote? Let me know in the comment section

1 Response to ALar in 2012! My Campaign for MMA Presidency