{Author’s Note: If you haven’t been informed, the head honcho is taking paternity leave from the blog for time being. Congratulations to him, but he mistakenly left me the keys to the website! Get ready for a wild ride!!!} 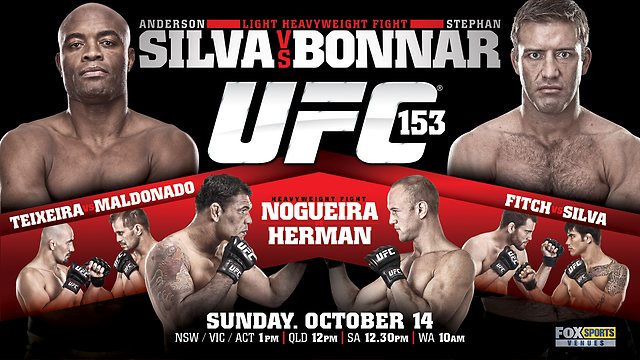 UFC 153 is another product of the injury plague that has struck the organization over the last 12 months.  I won’t take up any of your time complaining about overtraining or fighter insurance, but I will certainly attempt to get you pumped up for tomorrow night’s fights. Sure, there are no belts on the line and some of the matchups may not have a strong implication towards the hierarchy of their respective division, but as Dana White said, “There is nothing wrong with having a fun fight.” As a fan of MMA, I would be wrong to say I was not hyped up to watch stars like Anderson Silva and Big Nog fight in their native Brazil. The atmosphere that Brazilian fans create during a UFC event is second to none; add in two of the nation’s biggest stars? HSBC Arena is surely going to be rocking come tomorrow night. On to the preview!

Since we are getting a six fight Main Card tomorrow, I figured I would just throw my picks for the prelims above. If you have any questions about the early bouts feel free to ask me in the comment section or Twitter!

The night starts with a welterweight bout between two guys coming into the Octagon after winning their last fight. Personally, I am huge a fan of the 170-lb Demian Maia. I feel at a lighter weight he won’t be overpowered and can use his skill and finesse to look to finish opponents on the ground. Rick Story isn’t the most exciting fighter in the sport, but always seems game for a battle to the final bell. I think the two will look to stand and trade for a better part of the first round, but a scramble will ensue as the clock ticks down as one of the athletes looks to steal a round with a takedown. I can see Maia wearing Story down and getting into a dominant position during a scramble towards the end of the fight. Maia by Round 3 Submission.

It was good to see that during the weigh ins these guys could make fun of their ‘No Contest’ ruling back at UFC on FOX 4. Davis poked Prado’s eye and rendered the Brazilian unable to continue. Up to that point, I had Davis up on the scorecards. To my surprise, Prado looked like he had chugged a 2-liter of Mountain Dew right before the weigh ins. The guy was AMPED UP.  The usually monotone Prado was damn near inciting a riot in the Brazilian crowd. I expect him to bring it to Davis right away, but I’m not confident of his cardio. I think Phil will be able to control Prado as the fight drags on.  Don’t look for this one to be getting any Fight of the Night Honors. Davis by Decision.

As cool of a guy as Jon Fitch is, the more he says lately, the more I begin to dislike him.  His comments about the UFC being a popularity contest and lack of sponsorship opportunities are very irksome. It is clear that the UFC brass celebrates guys that go into the cage looking for a “war” and put on a show. Jon can look at his own record as to why matchmakers may not appreciate him and why sponsors may be shying away. Just freakin’ look at it!

The guy hasn’t finished a fight in five years! So then how does the UFC reward Jon ‘The Walking Decision’ Fitch? Throw one of the most talented and hyped fighters in the organization in Erick Silva at him.  Fitch could grind out a win versus Silva here if pulls the ‘lay and pray’ for three rounds, but Brazilian fans would sooner rush the cage and shiv Fitch before he could hear the final bell if that were the case. Silva handled a solid wrestler in Charlie Brenneman in his last bout and I believe he has the chops to deal with Fitch’s takedown attempts. I think this fight is another case of a scramble leading to a submission. Silva by Submission

Ahh, this is the slot that was once inhabited by my guy Rampage… sigh… Now, if you thought Erick Silva had a hype train behind him, Glover Teixiera must have the Hype Millenium Falcon spurring his reputation on. Former champs and top prospects want absolutely nothing to do with the guy. He has tons of power in his hands and his ground game is lethal. I don’t blame a soul for not wanting to tangle with Mr. T. It is tough to say anything bad about Glover, besides the fact that his recent opponents havent exactly been high caliber. Rampage certainly would have been a test, but I still don’t see a fight with Fabio Maldonado teaching us much about Teixiera. Maldonado strikes me as a guy that owns a whole lot of fedoras, whatever that means. He is going to get manhandled by Glover tomorrow night. Maldonado has never been knocked out, I think Glover is the guy to change that. Teixera by TKO.

The last time we saw Big Nog in the cage, his arm was laying limp after Frank Mir snapped it in half. As the arm popped, any long time fan of the sport cringed as one of their heroes was simply demoralized by his opponent. After a long lay off to rehab the arm, Nog is back and ready to avenge his arm cracking loss. When you dream up possible opponents for Big Nog, Dave Herman doesn’t exactly come to mind. His dedication to the sport is sometimes in question and his performances don’t really warrant a chance to fight one of the greatest MMA practicioners of all time.  Herman has also been trolling fight fans recently by proclaiming that “BJJ doesn’t work” and other statements of similar ilk.  This matchup may not be a superfight, but it is a fight that gives Nogueira that ability to put on a show in his home country. The guy is a superstar down there and the arena will be deafening if Big Nog takes home a W tomorrow night. Big Nog by submission. (Is it too cocky to predict an armbar as well??? Would be quite fitting…)

I had absolutely ZERO interest in this fight when it was announced. As much as I love watching Silva fight, I didn’t want to see him simply run through another Light Heavyweight for the heck of it. I saw no purpose in the fight. After a few brilliant promos put together by the UFC and Bonnar, my mind changed. I mean, the guy has never been knocked out, he only has two TKO’s on his record simply because refs deemed him too bloody to continue fighting. Bonnar will stand in front of anyone and trade blows with reckless abandon. You can beat his face to a bloody pulp and Stephan will still march forward. Bonnar is a pioneer of modern MMA and truly believes that he will be able to defeat the greatest fighter of all time tomorrow. Whether you give Bonnar a chance or not, you have to respect his adamantium chin and willingness to step in the cage with ‘The Spider’ in his native Brazil.

It is almost a foregone conclusion that Silva will win this fight. Vegas deemed Bonnar one of the greatest underdogs in the history of the sport. My main prediction here is that this will be Silva’s longest lasting fight at 205 pounds. That isn’t anything groundbreaking, but Bonnar has the chin to hang with Silva a little longer than his buddy Forrest did. I don’t see Stephan’s will breaking as Griffin’s did either. Unless Silva pulls out some ‘Matrix” moves we haven’t seen yet, I can see Stephan making it to the second round. But that’s where things get iffy. Silva is a predator, he looks for his opponent’s weakness in the first round and adapts and attacks it in the second. (See Henderson, Sonnen II) It could be the first and last time that Bonnar is knocked out cold in the Octagon. Silva by TKO. 2nd Round.

Winter is coming for Stephan Bonnar…

Well, it is officially the ALar Era here at Moai Martial Arts. Make sure all of your shots are up to date. Spay and nueter your pets! Enjoy the fights and let me know if you have any predictions of your own!