The Triumphant Return of the Weekend Fight Watch!

If you recall, the Weekend Fight Watch was a regular post I was doing to preview combat sports events that occurred outside of the UFC universe. It slowly stopped being posted due to the fact that the UFC started to put on about 134 events a year and there was never a time when there was no UFC event on the horizon. Oddly, in the wake of the massive success that was UFC 172, there is no Zuffa branded promotion this weekend. In an attempt to fill the void, a few other of our favorite combat sports are putting on some splendid shows. Check after the jump for a breakdown! 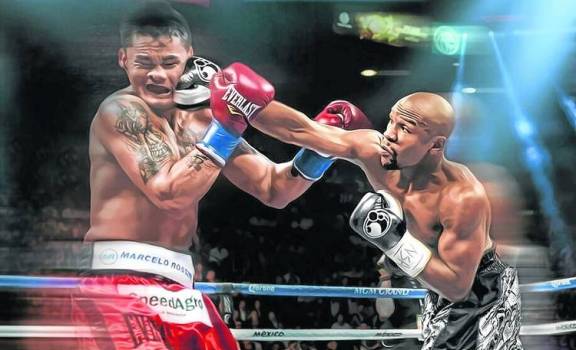 The big event this weekend is the Mayweather/Maidana fight in Vegas. With only a few fights left in his career, we should take every chance we get to bask in the greatness of Floyd ‘Money’ Mayweather. Love him or hate him, he is one of the only boxers today that can cause a sure-fire media stir. Even in his advanced age, his skills are still superior to damn near everyone who decides to lace up the gloves. With no stars coming down the boxing pipeline, and Adrien Broner’s hype train being derailed (by Maidana, nonetheless…) we need to enjoy Floyd’s “Big” fights while we still can.

As for the fight, this one will in all probability resemble a typical Mayweather performance. Maidana is a powerful puncher that can throw shots from a few different angles and he fully dismantled Mayweather knock-off Adrien Broner in December. Still, Floyd is too fast, too smart, and too skilled. Every time Maidana loads up for a punch, by the time he throws it, Floyd will be on the opposite site of the ring ready to toss a stinging jab at the Argentinian’s chin. In all likelihood, Floyd will take the decision and retain his belts. Even with the outcome seemingly predetermined, there is a certain pomp and circumstance to a Mayweather fight night. His final tilts carry an aura of the boxing events of yesteryear. Whether it is Justin Bieber walking him to the ring, or verbal altercations with in-ring interviewers, Floyd Mayweather is must-see TV.

While Floyd Mayweather’s fight may be a showcase in the finer points of the sweet science, there is a slight snoozefest possibility. If you are in the market for some unadulterated violence, Glory 16 on Spike might just be your answer. The kickboxing show features some solid match-ups that almost guarantee brutal fisticuffs. There is a Heavyweight Tournament going down where the “winner” will have to emerge victorious twice on Saturday night in Denver to earn the crown. The field is made up of some familiar names: Sergei Kharitonov, Anderson Silva (No, not that one…), Errol Zimmerman, and Ben Edwards. I have watched all of these guys fight before, and it is safe to say they have no issue throwing caution to the wind in search of a finish. There is also a Welterweight Title fight on the card between Karapet Karapetyan and Marc de Bonte. I don’t know much about the lighter weight classes in kickboxing, but these two dudes will likely put on a show and entertain the masses as smaller kick-boxers tend to do.

With that said, to me the most interesting part of the Glory card is Pat Barry’s return to a major combat sports promotion. After leaving the UFC, the gregarious Barry knocked a dude out in what seemed like a backyard fight, but this will be the first true test of his mythical striking skills. Personally, I can’t wait to watch Pat Barry throw those thunderous leg kicks without the risk of being double legged and driven to the mat. Barry has the ability to be a major star for Glory.  He is a known commodity in the combat sports world and is the American star that the promotion desperatly needs to gain ground here in the good ol’ US of A.

So if you are stuck inside on this lovely spring weekend, nursing a hangover or a wicked sinus infection (or both as I was last weekend…), there is plenty on the plate to satisfy your combat sports palate. Thanks for reading and let the good times roll!

This entry was posted in Commentary and tagged boxing, Floyd Mayweather, Glory, Kickboxing. Bookmark the permalink.