Anderson Silva vs. Georges St. Pierre: How it Needs to Happen

Anderson Silva vs. Georges St. Pierre: Do We Really Want to See it? 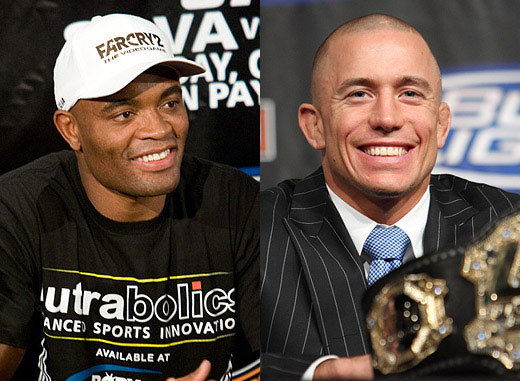 Smile for the Camera!

With Anderson Silva’s recent beatdown of Yushin Okami at UFC 134, the MMA community has started spit balling the idea of a “Superfight” between The Spider and GSP.  The pair are clearly the two greatest fighters in the world at the moment; there is no question about it.  Neither fighter has tasted defeat in a combined 24 fights, with GSP defending his welterweight belt eight times, and Silva his middleweight strap 10 times.  Neither Silva nor GSP have truly been faced with a legitimate challenge to their belts over the span, aside from a chemically aided Chael Sonnen giving The Spider a scare at UFC 117.  With these long title reigns, each fighter’s respective divisions have been cleared out.  With the bizarre turn of events in the Welterweight division, GSP will now face Carlos Condit at UFC 137, while his former opponent, a “beauty pageant” hating Nick Diaz will face former Lightweight champ BJ Penn at the same event. I fully expect GSP to be victorious against Condit, a fellow Team Jackson affiliate.  Silva’s demolition of the middleweight division has MMA fans calling for him to move to the light heavyweight division, where he has successfully competed and won twice in the UFC. Others call for a rematch with Sonnen, due to Sonnen controlling Silva for four rounds at UFC 117 before Silva’s last ditch submission effort earned him a victory. 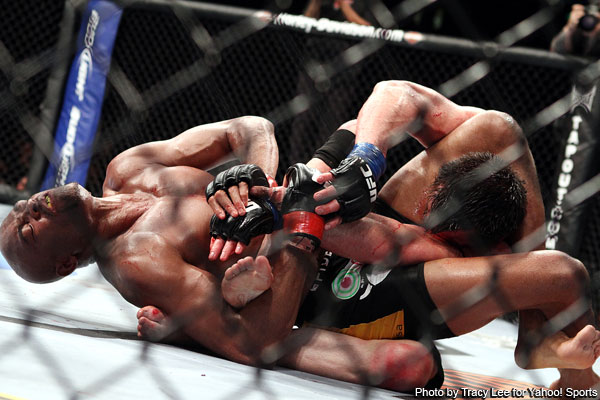 I could see the Sonnen fight making sense due to the nature of their first encounter, but I really don’t believe Chael deserves another shot at the title right yet.  UFC fans salivate at the idea of Silva moving up a division and taking on the likes of Jon Jones and Shogun Rua, but it seems as though Anderson is content at continually defending his middleweight championship.

If GSP gets past Condit at UFC 137, as I expect he will, I think we truly need to think about the impending Superfight between the Canadian and Silva.  There are no true meaningful fights left for Silva in his division, a number one contenders match has been set up between the aforementioned Sonnen and military hero Brian Stann.  At this point, I do not see either of these fighters as title shot worthy. After Condit, Jon Fitch seems the next in line for the welterweight title shot, but anyone who watched Fitch’s first attempt at the title won’t have high hopes for the Purdue product in a rematch with GSP.

We are then left with the “Superfight.”  The UFC’s two Golden Boys facing off in The Octagon.  I believe that this scenario is necessary, but only if Dana White and company do it right.  My worst fear is for something to happen along the lines of Silva dancing around GSP a la the Demian Maia fight, or GSP simply laying on top of Silva for five rounds, grinding his way to a decision victory. These situations would not be entertaining, nor prove MMA supremacy between the metaphorical Superman and Batman of the sport. Undoubtedly this match up would be a massive pay per view draw, even drawing the common sports fan into the mix. 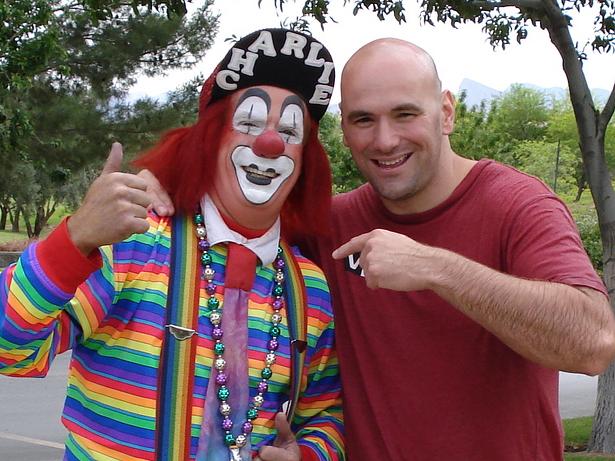 I’m sure the UFC would be able to draw over one million pay per view buys if not more, thus they need to present a product that would be worth the public interest and hopefully garner more interest in the sport in the future.  To put your two stud horses in the ring against each other takes balls, and Dana White and Zuffa need to handle this situation properly.

Here is how I, the humble Alar88, think the Superfight situation should be handled: (Warning: Outlandish ideas ahead!)

Some may say that a three fight series is too long to tie up the UFC’s cash cows for, but who would you rather see them fight? And the amount of casual fans that would check out a GSP/Silva PPV would make it well worth it.

These are my thoughts on how the Anderson Silva versus Georges St. Pierre Superfight Situation should be handled. How do you think it should go down? Any feedback, banter, or commentary is highly appreciated and encouraged here at Moai Martial Arts. See you in the comments section!

1 Response to Anderson Silva vs. Georges St. Pierre: How it Needs to Happen